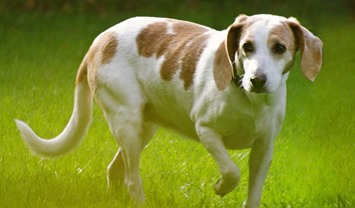 The Story Behind the Story

The Nearly Calamitous Taming of PZ grew out of the real-life drama of my foxhound, Tess, who lived in a laboratory cage as a breeder dog. Starting at six months old, her job was to produce puppies that would test medicines meant for humans.

I adopted Tess when she was three years old. She knew nothing about the world outside of the laboratory. She didn’t even know that there was a world. She was mute and nameless. Experts said Tess was the most damaged dog they had ever seen. Most of them predicted that she would never connect with a human. She was so fearful that she wouldn’t walk through a door to see what was on the other side.

When Tess finally began to venture out on short walks, people viewed her as a curiosity. She was a gorgeous hunter dog, but she never made a sound and sported a tattoo ID number in her ear. Children were especially intrigued by the silent creature trying to hide behind me.

By the time Tess was ten years old, she had become a startlingly kind and brave dog who did love humans. That’s when Tess and I ended up at Noah Webster MicroSociety Magnet School in Hartford, where we visited for three years! I read draft after draft as new students arrived in the fifth grade. Shy Tess sat at my side with her rear end facing the class. There were lively discussions about trust, love, fear, friendship, instinct, the cycle of life, the wackiness of a fictional ladybug, and at one point, a pressing demand for potty humor.

A couple of years later, this book was finally complete. I’d love to hear your thoughts about the book. You’ll find me at this e-mail address: martha@tamingpz.com.